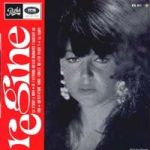 Long before Studio 54, Regine Choukroun built her nightclub dynasty starting with Chez Regine in Paris in 1956 with what was called the first discotheque. Catering to an international jet set of royalty and A-list celebs and offering gold membership cards and the invention of bottle service, the flaming-red-haired Regine went on to brand herself and open 19 clubs all over the world for the next 50 years. Now in her 70s, she’s focusing on her music career, but from her abandoned orphan beginnings and her career launch as a hat-check girl who persuaded a Rothschild to finance her first venture, Regine so far has lived the life. If nothing else, you gotta love a woman who grounds a Paris/Miami flight for refusing to put her cigarette out. Read more.

Perhaps it’s because I was a very young child growing up the U.K. in the 1970s that I’m so fond of this era. For me, it was a glorious time. It was all about being happy and free! The feathered hair, bell bottoms, disco dancing and glam rock (who can forget the divine Marc Bolan?) all had an effect on me to some degree. 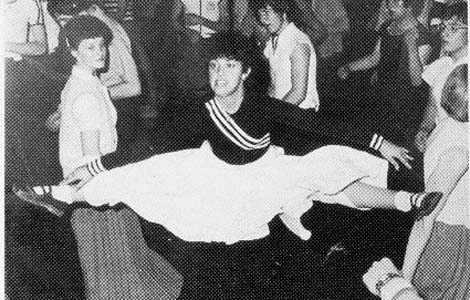 Much too young for the nightclub scene, I would long to be just like my friend’s older siblings, who would dance away the weekend at the world famous Wigan Casino Nightclub. American music magazine Billboard, voted Wigan Casino “The Best Disco in the World”, ahead of New York’s Studio 54. This was exciting news for me! The Casino was also featured in “This England,” a TV documentary about the venue, which was filmed in 1977. 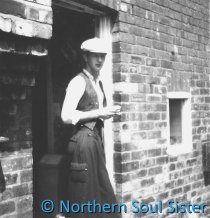 The documentary, however, was just about as close as I was ever going to get to it. Oh, how I longed to be eighteen! It was my first experience of what I thought being “cool” was all about. Never had I witnessed such amazing dancers who would spin around so aggressively, their flared trousers (known as Oxford bags) looked as if they would lift them off the ground! I wanted a pair immediately! I was such an innocent then and had little knowledge about the cocktails of amphetamines and other drugs that would be handed out like toffee just to keep these marvelous dancers going all night long. No matter, they were cool and fabulous and it looked just like the perfect heaven to me! No wonder my parents brushed off the mere idea of me ever going there! The Casino has long since gone, but the memory of it is still there and even more so for the thousands of dedicated Northern soul followers who would travel from all over the UK to dance away the weekend.

While all this fun and merriment was going on down at the Casino, our TV screens were bringing us style icons in the shape of Lauren Hutton, Joan Collins, Bianca Jagger, Anjelica Houston and of course Deborah Harry to name but a few. These women were strong, independent individuals who would stare out at me from the TV screen. I was transfixed! Everyone wanted to look like them.

At this time, clothing manufacturers were able to plan ahead because of advances in production technology, ensuring a uniformity of style, finish and cost. Standard, off-the-peg garments were available everywhere and for the first time, in all colors and sizes. Now it really was possible to wear clothing that mirrored our favorite fashion icon.

At the beginning of this decade the look was classic, streamlined, well-cut and unfussy. Jackets had wide lapels and trousers were flared. As the 1970s progressed, women’s clothes became more closely fitted to the body and skirts lengthened. There were lots of buttoned-down flap pockets, tight sleeves with deep cuffs and wide belts and, of course, the high-waisted trouser. In addition, trouser suits for women became very popular and there was a wide variety of fabrics from linen tweed to crushed velvet. Matt fabrics also became very in vogue; brushed cottons, wool jersey and imitation suede.

Colors were both bright and subtle. Canary yellow was teamed with dark brown and grey; lilac with purple and pink; slate grey, turquoise and terracotta were worn with black. For some, the 1970s was a time for a more unconventional way of dressing, and increasingly it became more individualistic. Though many people wore mass-produced clothing, it was often mixed with clothes from past decades and other cultures—much as we do today.

This decade was a special in so many ways. 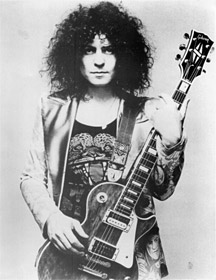 It was a time when I took for granted that the sun would always be shining every single day in the summer; a time for the Double Deckers (TV show), Banana Splits and Top of the Pops; feather boas, glittery eye shadow and lip gloss and of course, the divine Marc Bolan.

Writer Louise Sleigh has a vintage and retro fashion blog at CatwalkCreative.wordpress.com.