If only all thesis projects could be this fun. Here is a blog by a woman who works at Columbia and is also getting her doctorate there. Very funny for academia. 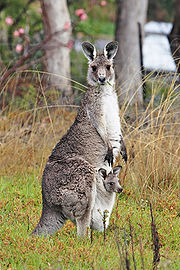 For those of us who have wondered where kangaroos came from, here is the answer:

A writer asks: “The question is not how the escaped from Australia etc, but how they got back there. But the evolutionist faces this problem as well. Would one of you care to volunteer your answer?”

If you want to read in plain English, here’s the Wikipedia version. But, frankly, I like the other … it makes me feel smart.

I’ve found a lovely, easy-to-execute design for a drought-resistant planting bed. Save water and make the world a more beautiful place. Discover it here …

Submitted by Marjorie Cunningham, owner of Marjorie’s Cracked Plate Jewelry and manager of the Reclaimed to Fame Market on 1000 Markets.

Meet Loran Scruggs who designs marvelous fun art toys and whistles from tin cans, bottle caps and found objects!  Loran is one of the newest merchants in the Reclaimed to Fame Market.  Her shop can be found at http://www.1000markets.com/users/loranscruggs.

Loran has been making things since her earliest memory of making a dragonfly out of smartie (candy) wrappers.  And to this day she is still using food packaging in her art.  She makes whimsical toys, art and whistles from colorful tin cans, bottle caps and found objects.  She enjoys how time stops when she is in the ‘flow’ of creation.  She says “I’m interested in joy.  Color is joyous for me so I use painted tin cans for their color and glint.  A lot of my work reference childhood and play, for myself play is a time of being in the moment, no past or future worries, a time of joy.  I hope that my work puts an amused smile on peoples faces, for when we smile we are in the moment, engaged, attentive and happy.”

For those of us who have no fear of rushing in, this is a great article on how to draw your own landscape plans. I must admit, it makes me tired just reading it, but it’s very illuminating, if only just enough to persuade you to hire a pro. Read more …

I’ve been hearing rave reviews from my friends down under about ClintonCharlie’s BootyHugger jeans from designer Clint Webster. They are made just for curvy girls with a soft denim with a touch of stretch that hugs in all the right places and are super comfy. This is the bootleg version—the skinny version is just as popular for Bondi-bound surfer gals. Next up, a high-waisted version. Visit ClintonCharlies’s website here.