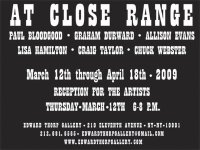 My painter friend Craig Taylor will be part of a group exhibit at the Edward Thorp Gallery in NYC, March 12 to April 18, that examines the boundary between abstraction and representation. Craig’s work is described as “off-kilter and ultimately surprising compositions, often produced by encroaching architectural fragments” but you really have to see it to believe it. See Craig’s work here.

Learn more about the exhibit here.